We would like to recognize how both BCHLNetwork and DUBNetwork have welcomed us and give our sincerest thanks to Brian Wiebe and Paul Figler for supporting women in sports and allowing us to speak out to open this conversation on each platform.

First and foremost, this is not meant to be an attack on anybody. Our goal is simply to further the conversation regarding women in the sports industry.

The first step to rectifying this is to not judge women in sports any differently than you do any man working in the same position.

In the world of junior hockey, it may be easy to ignore the issue and believe that it’s not a necessary conversation. However, the truth is, this is a problem at every level of hockey. While we may be focusing on the topic at the junior level, we need to remember that this runs deeper than we see.

Meet Theresa Feaster, the "brains behind the operation" of Team USA 🇺🇸 at #WorldJuniors, who is blazing her own trail in the hockey world.

Over the last few months, the sports community has taken a massive step towards supporting women who have a desire to work in the industry. In doing so, we have seen outstanding female voices brought to the foreground, whether it be in podcasts, writing, film, production, or any other area that draws a following.

We have seen prime examples of those who continue to sit with misogynistic views and those who are outstanding supporters of women who do incredible work.

Why we see fewer women in the sports industry

It’s been insinuated that women are a minority in the sports industry because it’s not as much of a passion for them as it is for men. However, those claims blatantly fail to acknowledge the number of obstacles most women face when breaking into the sports industry. Once in the industry, many women face more scrutiny than their male counterparts by their audiences.

For a little girl interested in sports, growing up can be disheartening. The constant barrage of conversations surrounding what is and isn’t “girly” enough can weigh heavily on a developing woman’s mind.

It’s not uncommon for a little girl to hear things like “Sports are for boys!” or “You can’t like sports! You’re a girl.”

Trailblazer doesn’t even begin to cover it. 🥇 pic.twitter.com/Ny5IxDAPMF

Worse still are comments that perpetuate the belief that little girls must like what is expected of them. Parents and teachers alike spend countless conversations and lectures steering girls and young women away from lines of work that are considered to be jobs “for men”.

From coaching to sports journalism, it’s often not about whether women are qualified but about whether society believes their presence is appropriate.

…and it never really ends

If it’s not those who are supposed to guide women through their formative years discouraging them from pursuing their dreams, it’s others within the sports community who challenge their knowledge based solely on their gender.

Ask any women in sports if someone has ever asked them to prove their sports knowledge, you’ll likely find that most have. Those few who haven’t, most certainly know someone who has.

Women in sports. Women playing sports. All positions should be options for careers.

Women are regularly asked to prove their worth over and above what’s expected of men in similar positions. Is all the work worth it when they could instead find a job somewhere with less ridicule?

That’s another common question women face, and unfortunately many decide that no, it’s not. That being said, a number of women have proven success is possible and work to inspire a new generation of women in sports.

Women in the WHL and BCHL

We based our numbers on what could be found on each team’s website, this may not be a complete representation of the women who work in BC Hockey League or Western Hockey League. 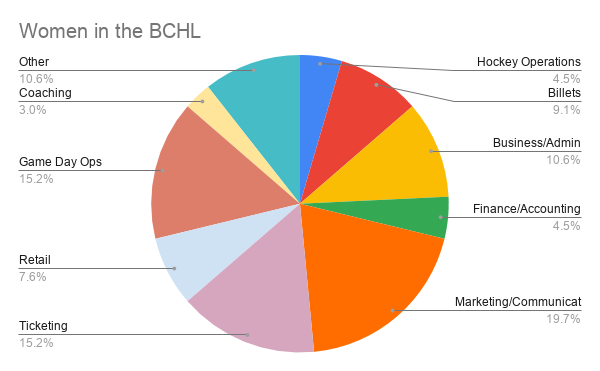 The above graph is a representation of all the women we found working in the BCHL. The Surrey Eagles and Cranbrook Bucks are not represented as there are no women working in their respective organizations that we could find.

In the BCHL, the highest areas with women employed are marketing, ticketing, and game-day operations. The areas with the fewest women represented are finance/accounting, hockey operations, and coaching. 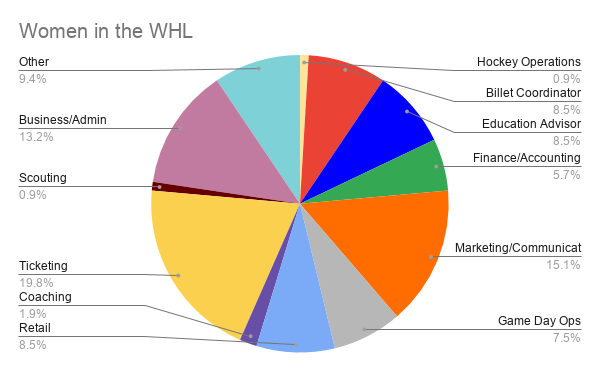 The above is a breakdown of the women currently working in the WHL and what jobs they are associated with. This doesn’t diminish the roles that the women are working but does show what jobs they hold.

We also didn’t include medical staff as we couldn’t find specifics for each of the teams. According to the data collected, the top two areas women are working in are Ticketing and Marketing/ Communications. The areas with the lowest number of women represented are in scouting and hockey operations.

Here, you can see the breakdown of women working in each team in the BCHL. 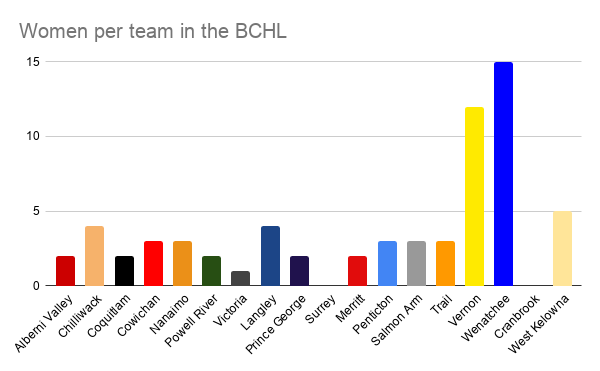 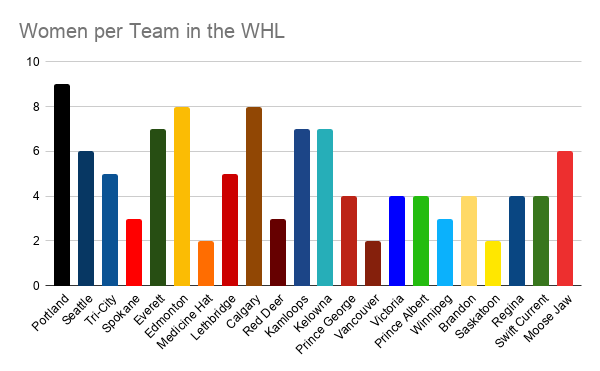 The graph above shows the breakdown of the women working for each of the WHL’s 22 teams. Portland has the most with nine whereas Vancouver, Saskatoon, and Medicine Hat have the fewest with two each. 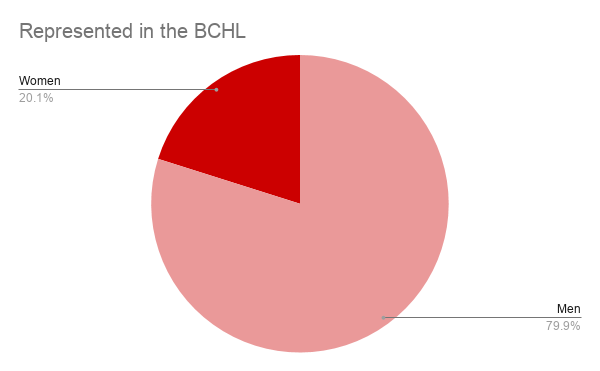 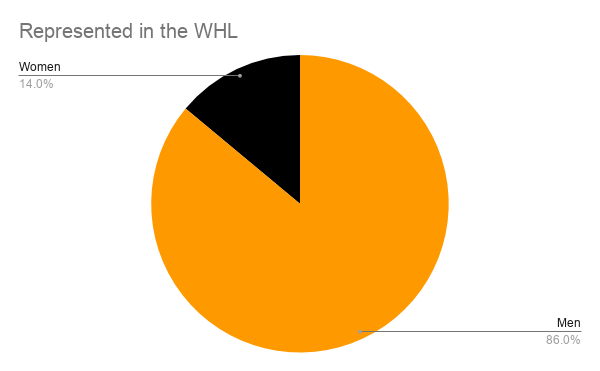 We should try to avoid giving those who argue against the benefit of women in sports any recognition. Instead, we should choose to recognize the individuals and organizations who support those same women.

We can choose to celebrate those who voice their support. While we shouldn’t have to recognize this, wouldn’t you rather give acknowledgment to those who positively influence the community rather than those who hold it back?

This won’t always be easy and sometimes we will not be able to resist defending our presence in sports on social media or to those we encounter daily.

Sometimes we will engage with the negativity but that shouldn’t deter us from the bigger picture.

The important thing is that we keep showing up. We have always been in sports, we will always be in sports. We have a voice and we’re going to use it.

If you would like to contact any of us to continue the conversation, you can reach any of us on Twitter at @ItsBrieann, @LizzChild, and @jessmosley.